Stills from the 2008 Broadway Revival

On a terrace in the South Pacific during World War II, two Polynesian children, Ngana and Jerome, sing a simple song in French (“Dites-Moi”). As they’re playfully chased inside by a house attendant, French plantation owner Emile de Becque escorts Nellie Forbush, a nurse from Arkansas, on a tour through his estate. Nellie admires the view of the sun over the ocean. Even in times of darkness, she can’t help but express her naturally bright disposition (“A Cockeyed Optimist”). Nellie confides in Emile that she joined the Navy to see the world and to meet new people. As they get lost in each other’s eyes, Emile breaks away to pour them a brandy, leaving them to consider one another, separately (“Twin Soliloquies”). After polite small talk about French literature, Emile confesses his love for Nellie, recalling the dinner just two weeks prior when he first noticed her (“Some Enchanted Evening”). Just before Nellie leaves to return to work, Emile reveals tthat he left France because he killed a man there, and she trusts him when he tells her that it was justified. Ngana and Jerome return, and Emile joins their playful singing (“Dites-Moi” Reprise).

Across the island, the restless American Seabees, led by crafty Luther Billis, lament the absence of female company. The one civilian woman on the island, nicknamed “Bloody Mary”, is a sassy middle-aged Tonkinese vendor of grass skirts who engages the sailors in sarcastic, flirtatious banter as she tries to sell them her wares (“Bloody Mary”). Billis yearns to visit the nearby island of Bali Ha’i – which is off-limits to all but officers – supposedly to witness a Boar’s Tooth Ceremony (at which he can get an unusual native artifact). The other sailors josh him, saying that his real motivation is to see the young French women there (“There is Nothin’ Like A Dame”).

Lieutenant Joseph Cable arrives, looking for Emile de Becque. Bloody Mary ominously describes what he might find on a mysterious island just visible through the clouds (“Bali Ha’i”). Though Cable initially brushes off Billis’ eager suggestion that they take a boat out, the Lieutenant does show an interest in witnessing a described “Ceremonial of the Boar’s Tooth” on the forbidden island.

Captain George Brackett emphatically accuses Bloody Mary of causing “an economic revolution” on the island because her business practices are more favorable to native workers than those of French settlers. Unwavering in the face of his aggression, she calls the French farm owners “stingy,” and the Captain orders the men to throw her souvenir cart off Navy property.

Cable tells Brackett and Commander Harbison about a mission to spy on the Japanese from their islands. Before Cable sneaks his way there, he must recruit an ally for help, someone who knows the country well. With Emile in mind, Cable, Harbison and Brackett call Nellie into their office to ask her to find out the Frenchman’s political leanings, and to learn why he killed a man before fleeing his home country. Nellie realizes she doesn’t know that much about him. Alone, the officers estimate Cable’s spy mission can last no longer than a week before he is found out by the enemy.

Lt. Cable stumbles upon Nellie reading a disapproving letter from her mother. Recalling his own familial differences back home, Cable explains that he, too, was misunderstood for taking a path less traveled (“My Girl Back Home”).

Out by the showers, the other nurses ask Nellie what Captain Brackett wanted. She tries brushing their questions off by announcing she is intent on ending her relationship with Emile for good (“I’m Gonna Wash That Man Right Outa My Hair”). Just then, Emile arrives, inviting her to a dinner party he’s throwing to introduce her to his friends and cohorts. She uses the opportunity to ensure that Emile believes in American ideals – that every man is created equally. He also tells her about the man he killed in France when he was much younger – a tyrant who overtook his town leaving its citizens powerless. He asks her to marry him (“Some Enchanted Evening” Reprise) and, disregarding her earlier promise to wash him right out, she agrees to come to his dinner. Hearing her friends giggling about how quickly she defied her own mantra, she surrenders to the love she can no longer deny (“A Wonderful Guy”).

Capt. Brackett warns Emile that, should he agree to aid Lt. Cable in his spy mission, he may not survive, but it could potentially do great good for America in this region. To Cable’s disappointment, Emile thoughtfully declines. Harbison suggests that Cable take a few days to unwind, so Cable decides to take Billis up on his suggestion of a boat trip to the exotic paradise (“Bali Ha’i” Reprise). On Bali Ha’i, Bloody Mary introduces Cable to her young and beautiful daughter, Liat. In a native hut, the two spend a night together and Cable confesses his love for her (“Younger Than Springtime”). Bloody Mary proudly tells Billis that Cable is going to be her son-in-law.

Meanwhile, after Emile’s party, an enthusiastic Nellie decides to stay with Emile that night, despite needing to sneak back to the camp and return the Jeep that Billis had borrowed for her. After a night of champagne, the two are ecstatically in love (“This Is How It Feels”). Emile introduces Nellie to Jerome and Ngana. Though she finds them charming, Nellie is shocked when Emile reveals that they are his children by his late first wife, a dark-skinned Polynesian woman. Nellie is unable to overcome her deep-seated racial prejudices and tearfully leaves Emile, after which he reflects sadly on what might have been (“Finale Act I”). Stills from the 2008 Broadway Revival

It is Thanksgiving Day, and the GIs and nurses dance in a holiday revue titled “The Thanksgiving Follies” (“Dance”). Emile arrives, bearing flowers for Nellie, who is onstage emceeing the lively event. Billis, promising to deliver the flowers, tells Emile that Nellie requested a transfer to another island. Meanwhile, Lt. Cable is determined to make his way back to Bali Ha’i, where he’s been visiting Liat daily, despite being treated for a serious case of malaria.

Liat arrives with Bloody Mary, who announces that Liat is being sought after by a rich white man on another island. She urges Lt. Cable to marry her daughter, elaborately describing the good life the two would have together (“Happy Talk”). Cable, disturbed in his sickness, gives Liat his watch, which was once his grandfather’s, and decides he cannot marry her. Bloody Mary leaves with Liat, angrily claiming she will marry Jacques Barrere.

For the final number of the Thanksgiving Follies, Nellie performs a comedy burlesque dressed as a sailor singing the praises of “his” sweetheart (“Honey Bun”). Billis plays Honey Bun, dressed in a blond wig, grass skirt and coconut-shell bra.

After the show, Emile asks Nellie to reconsider. She insists that she cannot feel the same way about him since she knows about his children’s Polynesian mother. Frustrated and uncomprehending, Emile asks Cable why he and Nellie have such prejudices. Cable, filled with self-loathing, replies that “it’s not something you’re born with”; it was an ingrained part of their upbringing (“You’ve Got To Be Carefully Taught”). Cable vows that, if he gets out of the war alive, he won’t go home to the United States; everything he wants is on these islands. Emile imagines what might have been (“This Nearly Was Mine”). Dejected and feeling he has nothing to lose, Emile agrees to join Cable on his dangerous mission.

The mission begins with plenty of air support. Offstage, Billis stows away on the plane, falls out when the plane is hit by anti-aircraft fire, and ends up in the ocean waiting to be rescued; the massive rescue operation inadvertently becomes a diversion that allows Emile and Cable to land on the other side of the island undetected. The two send back reports on Japanese ships’ movements in the “Slot,” a strategic strait; American aircraft intercept and destroy the Japanese ships. When the Japanese Zeros strafe the Americans’ position, Emile narrowly escapes, but Cable is killed.

Nellie learns that Cable has died and Emile is missing. Distraught, she goes to the beach and reflects regretfully on her choices in their relationship. She realizes she loves Emile and was foolish to reject him due to the race of his children’s mother (“Some Enchanted Evening” Reprise). Bloody Mary brings Liat to Nellie, saying that Liat refuses to marry anyone but Lt. Cable. Nellie walks them off to break the news of Cable’s death. 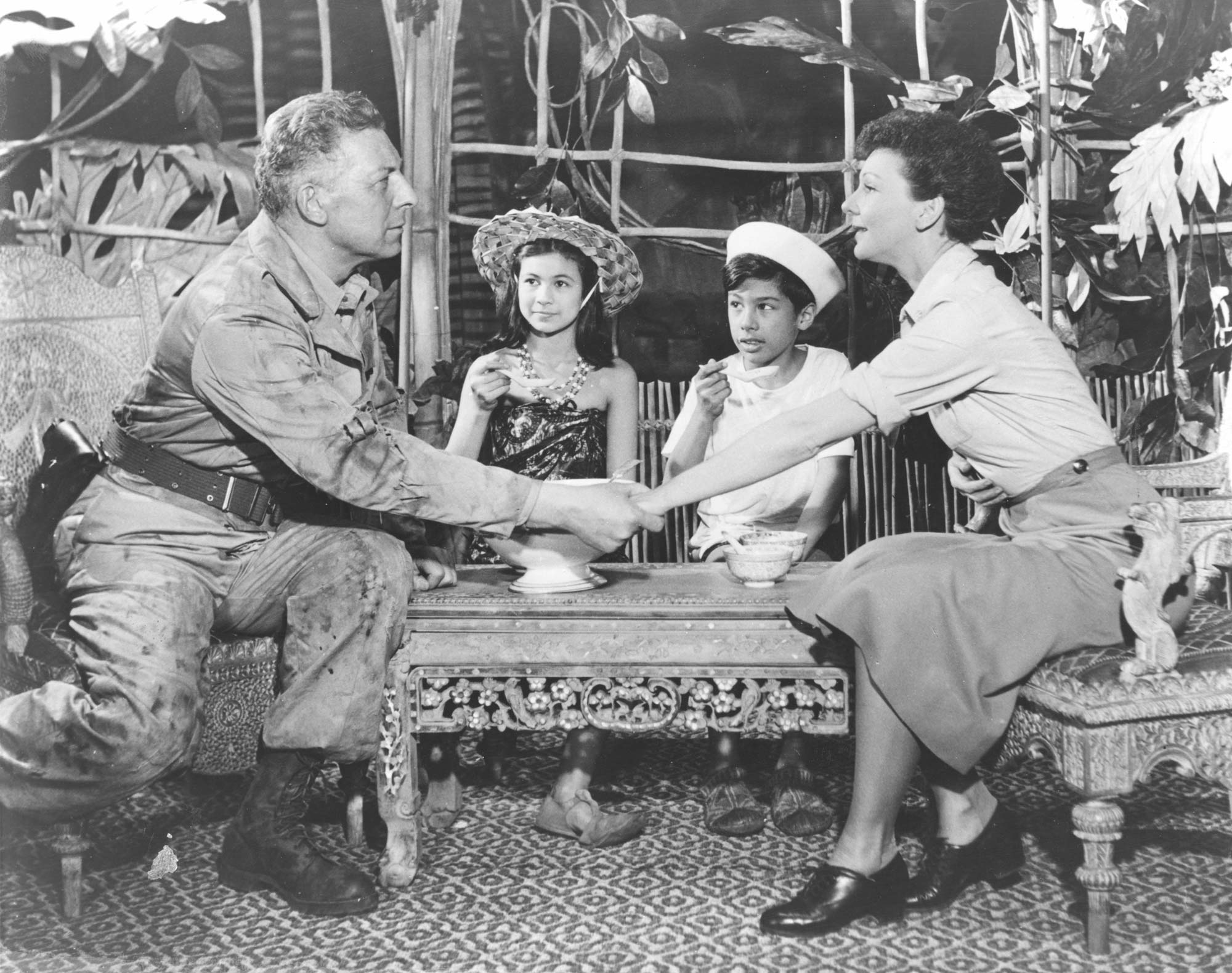 That evening, the Marine troops ready themselves in position to take responsive action against the Japanese. Cable and Emile’s espionage work has made it possible for a major offensive, Operation Alligator, to begin. The previously idle fighting men, including Billis, go off to battle.

Nellie spends time with Jerome and Ngana and soon comes to love them. One afternoon on the terrace at Emile’s house, as the children teach Nellie to sing “Dites-Moi,” Emile’s voice suddenly joins them. Emile appears to discover that Nellie has overcome her prejudices and has fallen in love with his children. Emile, Nellie and the children rejoice (“Finale Ultimo”).

During World War II, two love stories are threatened by the dangers of prejudice and war. Nellie, a nurse from Arkansas, falls in love with a local French estate owner, Emile. Nellie learns that the mother of his children was an island native and, unable to turn her back on the prejudices with which she was raised, initially refuses Emile’s proposal of marriage. Meanwhile, Lt. Joe Cable denies himself the fulfillment of a future with an innocent girl with whom he’s fallen in love out of the same fears that haunt Nellie. When Emile is recruited to accompany Joe on a dangerous mission that claims Joe’s life, Nellie realizes that life is too short not to seize her own chance for happiness, thus confronting – and conquering – her prejudices.