The Sound of Music Stage Synopsis

Salzburg, Austria, 1938, on the eve of the Anschluss. In the cloistered sanctuary of Nonnberg Abbey, the nuns invoke Psalm 110 and sing songs of praise (“Preludium”). One of the postulants, Maria, is nowhere to be found. She is instead out in the hills, where she goes “when her heart is lonely” (“The Sound of Music”). Back at the Abbey, Sister Berthe, Sister Sophia and Sister Margaretta debate with Mother Abbess as to whether Maria is prepared for the devout life of a nun (“Maria”). The Mother Abbess calls for Maria, and they discover a shared love of a particular childhood song (“My Favorite Things”). To help Maria mature before committing to the religious life, the Mother Abbess sends her out from the Abbey to serve as temporary governess to the seven children of a former naval officer, Captain Georg von Trapp (“My Favorite Things” Reprise).

Maria arrives and discovers that the Captain has, since the death of his wife, closed himself off emotionally. The Captain introduces Maria to the children, who do not play, but march instead. Realizing they have grown up without music in their lives, Maria teaches the children the basics of singing (“Do-Re-Mi”).

That evening, the oldest child, Liesl, sneaks away to meet Rolf, a local boy who’s caught up in the political fervor of the times. Warning her of the dangers of her innocence, he offers himself as a suitable protector. Liesl, in her way, accepts (“Sixteen Going On Seventeen”). Meanwhile, a loud thunderstorm causes the frightened children to seek out Maria in her bedroom, where she diverts their attention with a rousing folk song (“The Lonely Goatherd”). Later that night in a dark hallway, Gretl musters up joy while frightened at the continuing sounds of the storm (“The Lonely Goatherd” Reprise).

The Captain returns a month later with Elsa Schraeder, a sophisticated Viennese widow. They are accompanied by Max Detweiler, Third Secretary in the Ministry of Education and Culture, who is on the hunt for the perfect local singing group to perform at the annual Kaltzberg Festival. Elsa finds it charming here in the provinces but is frustrated that the Captain has yet to propose to her. Max explains what’s standing in the way: both Elsa and the Captain are rich! (“How Can Love Survive?”).

Maria arrives with the children, all wearing clothing that Maria has made from her old bedroom curtains. The Captain is embarrassed and enraged. Maria confronts him and tells him how little he understands his children, and he orders her back to Nonnberg. But when he hears the children singing for Elsa (“The Sound of Music” Reprise), his heart opens up. Moved that Maria has brought music back into his home, the Captain asks her to stay.

The Captain throws a lavish party so the local gentry can meet Elsa (“The Grand Waltz”). However, the political divide is widening between those who support the proposed German takeover and those like von Trapp, who believe in Austrian sovereignty. As the orchestra plays an Austrian Folk dance (“Laendler”), young Kurt tries to remember it with Maria. The Captain steps in and, as they dance, the Captain and Maria recognize their unspoken attraction. Brigitta confirms it to Maria, who promptly breaks away. At Elsa’s request, the children sing for the guests (“So Long, Farewell”). Max is thrilled: a singing group of seven children in one family? Perfect for the Festival! The children make their way to bed; the guests make their way to dinner; and Maria, confused by her encounter with the Captain, leaves without saying goodbye, fleeing back to Nonnberg Abbey.

At the Abbey, Maria tells the Mother Abbess that she is ready to take the orders of poverty, obedience and chastity (“Morning Hymn”). But the Mother Abbess, realizing that Maria has fallen in love, encourages Maria to return to the Captain and find the life she was born to live (“Climb Ev’ry Mountain”). Max, in anticipation of the upcoming Kaltzberg Festival, rehearses with the children. But without Maria, they’ve lost the joy of making music (“My Favorite Things” Reprise). Suddenly, Maria returns, and they’re delighted! But they have news for her: Father is going to be married to Frau Schraeder. Maria’s heart is broken, but she resolves to fulfill her duties until arrangements can be made for a new governess.

The political situation is worsening, and Max and Elsa implore the Captain to weather the coming storm by being noncommittal (“No Way to Stop It”). The Captain remains unwavering in his disgust for the Nazis, and he and Elsa realize that they cannot share a future. Elsa returns to Vienna for good. Seeing Maria again, the Captain now understands what he and Maria have both known deep inside for many weeks (“An Ordinary Couple”).

In Mother Abbess’ office, Mother Abbess and the Nuns of Nonnberg Abbey prepare Maria for her wedding (“Gadeamus Domino”). As the nuns watch, Maria walks down the aisle at her wedding in procession with the children and the Captain (“Maria” Reprise). The procession continues, and the nuns appear behind the family (“Confitemini Domino”).

While Maria and the Captain are away on their honeymoon, the Anschluss occurs; Austria is annexed by Nazi Germany. The von Trapp house is the only one in the province not flying the flag of the Third Reich (“You mean the flag with the black spider on it?” asks Brigitta). The Captain and Maria return to find that much has changed: Many have joined ranks with the Nazis, including Rolf and Franz the butler. Max, without the Captain’s knowledge, has been readying the children for their performance at the Festival. The Captain refuses to allow his family to perform on behalf of an Austria which no longer exists, and Maria stands by him. Liesl now sees how much Maria truly loves the Captain, and Maria shares her new understanding of love (“Sixteen Going on Seventeen” Reprise).

Admiral von Schreiber of the Third Reich, accompanied by Herr Zeller, the local Nazi leader, arrives to inform Captain von Trapp that he must accept a commission in the German Navy and report immediately to Bremerhaven. Thinking quickly, Maria displays the program for the Festival showing that the Trapp Family Singers – which includes the Captain, of course, as head of the family – are scheduled to perform, so he couldn’t possibly leave now. The Captain gets it, and joins in the impromptu rehearsal. Admiral von Schreiber grants permission for the Captain to report to duty several days later.

The Festival begins (“Do-Re-Mi” Reprise) and von Trapp himself sings a quietly defiant hymn to his beloved Austria (“Edelweiss”). But when Max announces that a guard of honor is waiting to escort the Captain away as soon as the concert is over, Maria leads the von Trapp family in more song as they escape, one by one, into the night (“So Long, Farewell” Reprise). Max gives out the concert prizes slowly, buying time. The Trapp Family Singers are announced as winners of the Festival, but they are nowhere to be found.

The family takes refuge in the garden of Nonnberg Abbey as Nazi soldiers swarm the hallowed ground. It is Rolf who discovers the von Trapps, but seeing Liesl, he chooses not to reveal their hiding place. Still there seems to be no way out; the Nazis have closed the border and are guarding every road. The family has no choice but to make their way to freedom by way of the mountain. It is a daunting journey, but Maria, who grew up on that mountain, knows the way. The Mother Abbess reminds them that they will have help: “For ye shall go out with joy and the very hills shall break forth before you into singing” (“Finale Ultimo: Climb Ev’ry Mountain”). 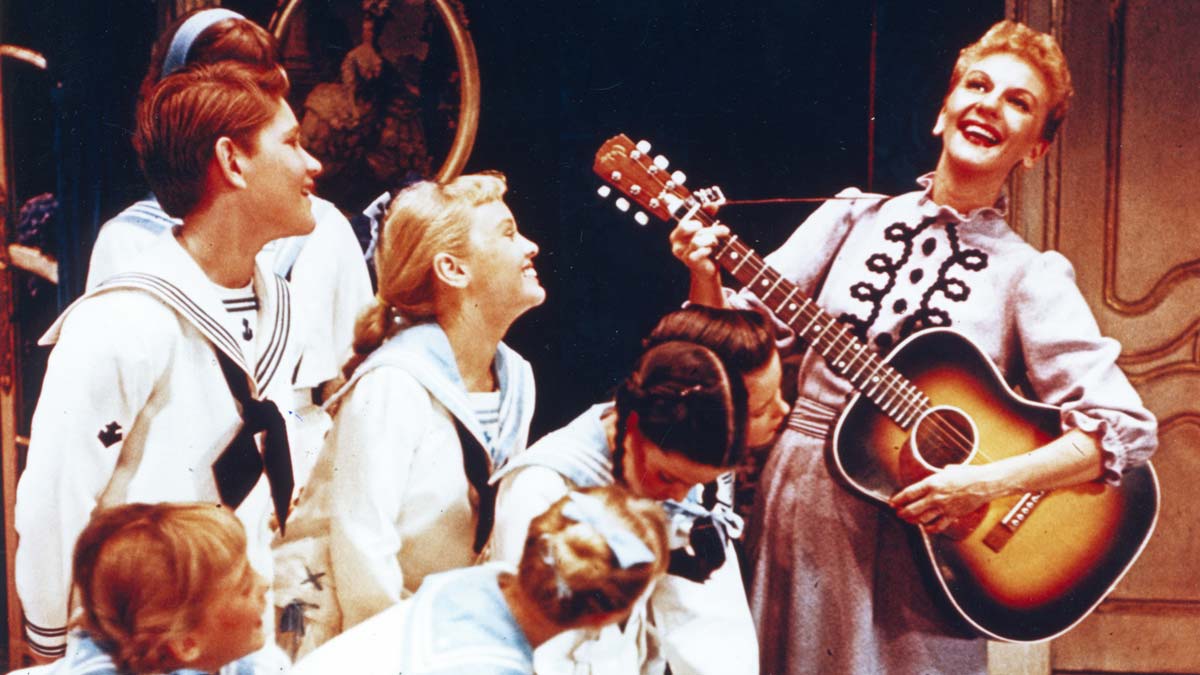 THE SOUND OF MUSIC: STAGE VERSUS FILM

THE SOUND OF MUSIC CONDENSED SYNOPSIS

When an Austrian postulant proves too high-spirited for the religious life, she is dispatched to serve as governess for the seven children of a widowed naval Captain. Her generosity of spirit, love of music and growing rapport with the children gradually capture the heart of the stern Captain. They fall in love and marry. Upon returning from their honeymoon, the newlyweds discover that Austria has been invaded by the Nazis, who demand the Captain's immediate service in their navy. Refusing to capitulate, the Captain and his family narrowly escape over the mountains to Switzerland.
ABOUTGet to know Rodgers & Hammerstein